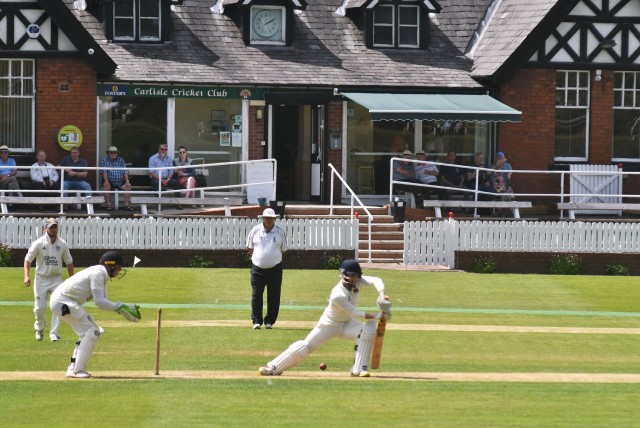 Another half century from Tom Benn helped Carlisle to victory at Keswick.

Carlisle bounced back from last week's Higson Cup final defeat with a routine, 8-wicket win over Keswick at Fitz Park in North Lancs Premier.
The hosts slumped to 42-4 after wining the toss and opting to bat, with two early wickets for Fraser Conn largely to blame.
Dan Gaskell offered some resistance with 40, but only Stephen Moss and Joe Grisdale could provide any real support.
Carlisle's stand in South African professional Ernest Kemm demonstrated his worth, picking up 3-29 from 9.3 overs.
A total of 120 was unlikely to be enough unless the Keswick bowlers could prise out one or both of Carlisle's in-form openers Tom Benn and Ben Davidson.
Once again though, Benn and Davidson threatened to win the game on their own, putting together an opening stand of 109.
Although both then departed quickly, visiting skipper Marc Brown and Kemm added the five runs needed for victory.
Victory leaves Carlisle in fourth place, just four points behind Furness, and everything to play for after Cleator's defeat at Haverigg and Cockermouth's lost to local rivals, Workington.